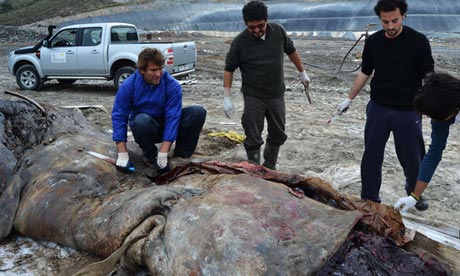 Marine biologists examine a sperm whale on the Spanish coast south of Granada. The animal died after swallowing 17kg of plastic dumped by greenhouses that supply UK supermarkets. Photograph: AFP/Getty

A dead sperm whale that washed up on Spain's south coast had swallowed 17kg of plastic waste dumped into the sea by farmers tending greenhouses that produce tomatoes and other vegetables for British supermarkets.

Scientists were amazed to find the 4.5 tonne whale had swallowed 59 different bits of plastic – most of it thick transparent sheeting used to build greenhouses in southern Almeria and Granada. A clothes hanger, an ice-cream tub and bits of mattress were also found.

The plastic had eventually blocked the animal's stomach and killed it, according to researchers from the Doñana national park research centre in Andalusia.

Researchers at first found it hard to believe that the 10-metre animal had swallowed the vast amount of plastic they found protruding through a tear in its stomach.

All were typical of the closely packed Almeria greenhouses that cover about 40,000 hectares – and are clearly visible in satellite photographs taken from space.

Desert-like Almeria has transformed itself into Europe's winter market garden thanks to the plastic greenhouses where plants are grown in beds of perlite stones and drip-fed chemical fertilisers. Local farmers report that Tesco, Waitrose and Sainsbury's are all valued customers.

The greenhouses produce 2.4 tonnes of plastic waste per hectare each year – or more than 45,000 tonnes altogether.

Much is treated in special waste centres, but environmentalists complain that local riverbeds are often awash with plastic detritus and, with greenhouses built right up to the high-tide line, some also ends up in the sea.

"The problem of degraded plastics that are no longer recyclable still remains," Renaud de Stephanis, lead researcher at Doñana, and his team reported in the Marine Pollution Bulletin.

Only about 1,000 sperm whales – the world's biggest toothed whales – are thought to live in the Mediterranean. They live for up to 60 years and are often killed after getting caught in nets or being hit by ships.

Now another man-made danger has been detected. "These animals feed in waters near an area completely flooded by the greenhouse industry, making them vulnerable to its waste products if adequate treatment of this industry's debris is not in place," warned de Stephanis.

Read original story
Posted by Whale of a Time at 03:41