A Fall From Freedom from OdyseeTV on Vimeo.

HOW TO GET INVOLVED

By viewing A Fall From Freedom, and by going to this page, it is clear that you are already involved in this issue. To initiate effective change, your voice must be heard.

First, there are a variety of organizations working diligently not only to end the Japanese dolphin drive fishery, which provides so many animals to marine parks worldwide, but to end the commercial display of whales and dolphins altogether. Seek out these organizations, support their work, and get involved. It may not sound like much, but real change for the good can only come about when an informed citizenry stands up, expresses their opinion, and sees through the propaganda of the corporate public relations machine.

Actions You Can Take

• Do not attend any marine park or aquarium that displays whales or dolphins.

• Tell your friends not to attend these facilities as well and explain why.

• Find and support the non-profit organizations that have been educating the public about captive whales and dolphins, and that have been working to end the Japanese dolphin drive fishery.

• Share A Fall From Freedom with friends, neighbors, family, and co-workers, and start discussions about the issues.

• Write letters and send emails expressing your opinion to marine parks in your country that display whales or dolphins. All of these facilities are directly or indirectly involved in the death of thousands of dolphins through the Japanese drive fishery. If they do not take animals directly from the drive fishery, by way of displaying these animals they are justifying and condoning it.

Letters should be written to your Congressperson, your Senators, or your government representative expressing your opposition to the importation of any whale or dolphin into your country.

NOTE: When the issue of dolphins dying by the thousands in the nets of purse seine tuna boats came to the attention of citizens worldwide, public outrage directed toward this practice all but ended it. A billion dollar industry, with its high-paid lobbyists and its corporate public relations machine, was forced by public opinion to accept and can only dolphin-safe tuna.

Only through public concern and action can the issues presented in A Fall From Freedom be dealt with effectively and responsibly.
Posted by Whale of a Time at 00:36 No comments: 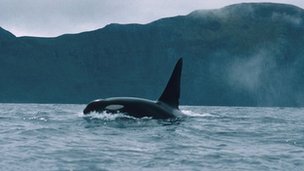 Prof Peter Tyack, University of St Andrews commented, "Killer whales are thought to learn their calls from their group.”

Members of the public are being asked by scientists at the University of St Andrews to help them investigate the way whales communicate.

So-called "citizen scientists" from across the world are being urged to listen to and help classify sounds made by the mammals.

The St Andrews Sea Mammal Research Unit is part of the Whale Project - a global effort to categorise whale calls.

It aims to establish whether calls vary between different groups of whales.

"Citizen scientists" who log on are presented with a whale call and shown where it was recorded on a map of the world's oceans and seas.

Distinctive dialect
After listening to the whale call, members of the public are then asked to listen to a number of potential matching calls from the project's database.

If a match is found the results are stored.

Prof Peter Tyack of the University of St Andrews said: "By asking hundreds of people to make similar judgements, we will learn how reliable the categories are, and they get the fun of hearing these amazing sounds."

"Only a few researchers have categorised whale calls."

Scientists hope to address a number of questions about whale communication.

Biologists studying killer whales have reported that each group of whales has its own distinctive dialect of calls, with related groups having dialects that are more similar.

The Whale Project asks "citizen scientists" to test these results by making their own judgements of similarity between calls.

Much less is known about the calls of pilot whales than of killer whales.

Researchers from St Andrews and the Woods Hole Oceanographic Institution in Massachusetts want to know the size of the pilot whales' call repertoire and whether call repertoires vary between groups, as in killer whales.

"Most mammals have a fixed species-specific repertoire of calls, but killer whales are thought to learn their calls from their group," said Prof Tyack.

The Whale Project is co-sponsored by science magazine, Scientific American.