Whale of a Time at Sail, Power & Watersports Show 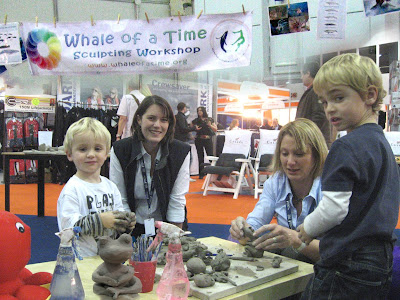 Whale of a Time Species Modelling Workshop provides an opportunity for children and all visitors to the boat show to make a model of their favourite marine species and take it home. View press release at Sail, Power & Watersports Show website.

People express their creativity and connect with animals and develop their relationship with nature. You can find all the great master pieces in the Whale of a Time Art Gallery including creations of abstract impressions of ocean waves, dolphins, sea snakes, whales, octopi, great white sharks, boats and divers. You can also view the Whale of a Time Gallery here.

Whale of a Time raises awareness through creative workshops on environmental issues while providing a fun environment to learn about endangered marine species and habitat destruction. We believe that we can learn through developing a loving relation with nature while having a whale of a time. You can read more about the project at www.whaleofatime.org

James Brooke, Show’s Managing Director, said, "Thank you so much! You've made the show!"

Sarah Brooke (wife of James Brook, organiser of the show) said, "My sons couldn't wait to get back to do the workshop. They love it! Not only do the children love this but I feel I’ve gone back to my artistic days. So much fun you have to be here next year.”

Robin Brooke, father of James Brooke, said “This has been a fun experience for all the family and has made the kids more aware of the importance of our wonderful sea creatures.”

Mike (10) said, “I think that this workshop was amazing. I love moulding clay! Thank you!”

Mother of Ali, Julian & Sophie (5) said, “What a fantastic idea! My daughter loved it! Thank you very much!”

Hedre (44) said, “What a wonderful idea to make the children - young and old aware!”

Cheggs (36), said, "Together we can heal the world. We all make a difference."

Andy (19), said “I really enjoyed myself, not done any sculpting before but I find it’s really cool and it made me think about endangered species.”

Irene Schleining, Founder of Whale of a Time, said, “We’re happy to be at the Sail, Power & Watersports Show again this year! We have had a whale of a time! We’ve had so many people here keen to have a go at making the models. The models they’ve made are beautiful and I have to say it’s rewarding to see the enthusiasm, especially the children, enjoying learning about the animals and to see how they get engaged with environmental issues which is the most important part of this workshop.”

Whale of a Time is based at K16 amongst lots of boats and is great entertainment for families, kids, teenagers, adults and anyone who is inspired by marine species and likes to express their creativity. We’re so happy to see everybody exploring their creativity and having a whale of a time! Read more about Whale of a Time projects at www.whaleofatime.org