Images show vast tracts of land cleared to grow palm oil sit alongside beautiful shots of natural world threatened by deforestation in a poignant new exhibition at Kew Gardens.
Focus on the Rainforests highlights the threat facing jungle in the Amazon Basin, Democratic Republic of Congo and Indonesia and the importance of its role in fighting climate change.
Sounds, video and even smells will accompany the images taken by Spanish photographer Daniel Beltra, who won this year's Prince's Rainforests Project Award at the Sony World Photography Awards.
Opens on Satruday and runs until 6th December. The showcase will then tour to Paris and Berlin. 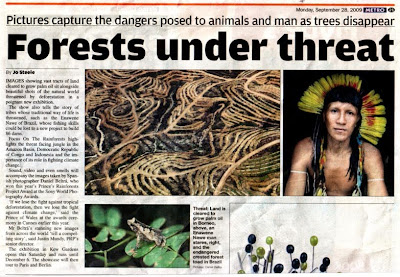 This project started out in June 2007, in response to the Howard Government’s controversial “Emergency Intervention” into Aboriginal communities in Australia’s remote Northern Territory. All in the name of “protecting children”, the Intervention took away all existing Aboriginal land rights, suspended the Racial Discrimination Act and placed over 70 communities under compulsory government control. Subsequent government measures have had little to do with directly improving the wellbeing of children, but instead have disempowered traditional owners, opened up access to valuable Aboriginal land, and sought to forcibly assimilate Aboriginal culture.... Read more at http://ourgeneration.org.au/about-2
Posted by Whale of a Time at 00:10 No comments: Links to this post