A study finds that 84% of the world’s fish tested was not safe to eat more than once per month because of mercury poisoning. And 13% of the fish isn’t safe to eat, period. Though honestly, I’m not sure how happy I am eating something that’s so poisonous you can only eat one serving per month.

In the United States the number is better. Though in the US the study only looked at one fish, Alaskan Halibut (which I’ve had, it’s yummy). 43% of Alaskan Halibut was only safe to eat once a month because of its mercury levels.

The study comes from the Bioresearch Diversity Institute, and was released in January, but I’d missed it. This chart shows the percent of fish tested in each country that is not safe to eat more than once per month. While in the US they only tested one fish, Alaskan Halibut, in other countries they tested 15-20 fish per country, I was told by Dr. David Evers of the Bioresearch Diversity Institute, one of those behind the study.

As the chart above shows, in Italy and Japan, 100% of the fish tested was only safe to eat once per month.

Evers pointed me to a handy chart they have up showing how much fish you can eat per month and safely avoid mercury poisoning – but keep in mind, this is just mercury. You also have to research PCB limits on eating fish as well: 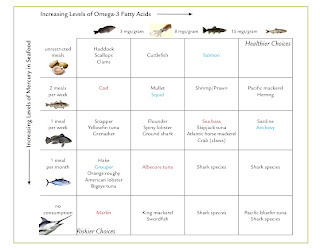 Interestingly, the federal guidelines say to only eat two servings of salmon per week, whereas the chart says not to worry about it.

I have to say, the more I read about this kind of thing, the less I want to eat fish all together. If you have to check multiple tables to find out whether it’s even safe at all to eat fish, then why eat it? I get that it’s good for you (if it doesn’t kill you), but damn, this is the point we’ve come to – having to check tables in the grocery store to see if particular foods are going to eventually poison us.

Not to mention, what the hell are we doing to the world?

Here’s more on this from CBS:

Positive news to share from the Community Environmental Legal Defense Fund (CELDF)that New Mexico has become the first county in the United States to ban oil and gas extraction!

As CELDF explains: NEW MEXICO: The County Commission of Mora County, located in Northeastern New Mexico, became the first county in the United States to pass an ordinance banning all oil and gas extraction. Drafted with assistance from CELDF, the Mora County Community Water Rights and Local Self-Government Ordinance establishes a local Bill of Rights - including a right to clean air and water, a right to a healthy environment, and the rights of nature - while prohibiting activities which would interfere with those rights, including oil drilling and hydraulic fracturing or "fracking," for shale gas. Read more here: http://www.celdf.org/celdf-press-release---first-county-in-us-bans-fracking-and-all-hydrocarbon-extraction---mora-county-nm
Posted by Whale of a Time at 12:12 No comments: