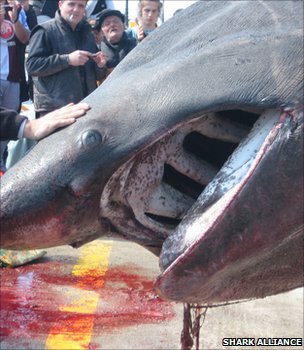 MEPs have voted to close loopholes that allowed some EU fishing vessels to continue "shark finning".

Although the EU banned removing shark fins at sea and discarding the body, special permits allowed finning to continue legally.

The decision to back the European Commission's proposals will now be considered by EU fisheries ministers.

The resolution was adopted with 566 votes in favour, 47 against and 16 abstentions.

"[We have] been working towards this and other fundamental reforms in European shark policies for more than six years and are thrilled with today's vote and the progress we expect to stem from it."

Dr Joanna Swabe, EU director for Humane Society International (HSI), said she was delighted that MEPs had decided not to support the argument to retain the special permits.

"This would have been disastrous for shark protection not just in EU waters but worldwide," she said.

"HSI commends the European Parliament for defending sharks against the cruel and wasteful practice of shark finning."

Shark finning is driven by the fact that the animals' fins are highly valuable in comparison with shark carcasses.

As severed fins could be easily stored, it made economic sense for fishing vessels to remove the fins at sea, rather than bringing the entire animal - which would quickly fill a vessel's cold storage areas - into port.

The EU's global catch of sharks ranks second only to Indonesia, yet the European Commission has committed itself - under the EU Action Plan for the Conservation and Management of Sharks - to adopt the necessary measures to conserve shark species and to minimise waste and discards from shark catches.

Finning is also deemed cruel because the fins are often removed while the animal is still alive - it then drowns when it is thrown back into the sea.

Conservationists argued that the issuing of Special Fishing Permits (SFPs) that allowed fins to be removed at sea prevented the EU ban, introduced in 2003, from becoming fully effective.

According to European Parliament data, the largest number of SFPs issued to date were to Spanish and Portuguese vessels (1266 and 145 respectively, between 2004 and 2010).

It added that until 2009, the UK, Germany and Lithuania had also issued SFPs.

Ms Polti observed: "Shark Alliance member groups look forward to continued co-operation in shepherding and promoting a final 'fins-attached' rule and in securing complementary safeguards, such as domestic and international catch limits, to fully address the overexploitation of sharks." The Sunda pangolin (pictured) is the only mammal in the world to be covered in scales. This unique body armour is highly prized in traditional Chinese medicine. The scales are sold with the claim that they tackle a long list of ailments, from helping breastfeeding mothers lactate to curing cancer

Tigers are listed as Endangered by the International Union for the Conservation of Nature's Red List, and trade in tiger parts was banned worldwide in 1990s. Poaching persists though, mainly for their bones for use in traditional Asian medicines. As tigers are synonymous with power, their bones are believed to promote healing. Tiger pelts and other body parts, such as teeth, skin and claws, are also used for decoration

According to wildlife trade monitoring network Traffic, the international demand for rhino horns continues to increase. From 2008-2011 gangs were said to have killed more than 800 rhinos for their horns, which can fetch £22,000 per kilo on the black market. The horns are falsely believed to cure a wide variety of ailments, including cancer.

The Moral Dilemma of Eating Animals
Posted by Whale of a Time at 00:03