Survival of the Beautiful by David Rothenberg 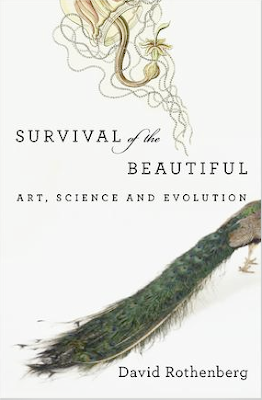 Survival of the Beautiful: Art, Science, and Evolution

A brilliant investigation of why nature is beautiful and how art has influenced science.

Taking inspiration from Charles Darwin’'s observations that animals have a natural aesthetic sense, philosopher and musician David Rothenberg dives into the mysteries of why we create art, and why animals, humans included, have innate appreciation for beauty.

The book will be launched in the UK at the GV Art London on Feb. 15th, 6pm, a venue specializing in art/science exhibitions. All are welcome.


Why did the peacock’s tail so trouble Charles Darwin? Natural selection could not explain it, so he had to contrive a whole new theory of sexual selection, which posited that certain astonishingly beautiful traits became preferred even when not exactly useful, simply because they appealed to the opposite sex, and specifically so in each case. And yet the parallels in what gets preferred at different levels of life suggest that nature may in fact favor certain kinds of patterns over others. Visually, the symmetrical; colorwise, the contrasting and gaudy; displaywise, the gallant and extreme. Soundwise, the strong contrast between low note and high, between fast rhythm and the long clear tone. For that matter, plenty of beauty in nature would seem to arise for reasons other than mere sexual selection: for example, the mysterious inscriptions on the backs of seashells, or the compounding geometric symmetries of microscopic diatoms, or the live patterns pulsating across the bodies of octopus and squid.

Humans see such things and find them astonishingly beautiful: are we wrong to experience Nature in such terms? Far greater than our grandest edifices and epic tales, Nature itself nevertheless seems entirely without purposeful self-consciousness or self-awareness. Meanwhile, though we ourselves are as nothing compared to it, we still seem possessed of a parallel need to create. So: can we in fact create our way into better understanding of the role of beauty in the vast natural world?

A bravura investigation..with verve, multidiscipline fluency, and an encompassing vision, Rothenberg accomplishes his mission to change the way we perceive and understand the intertwining of natural evolution and human cultural evolution, beauty and life, art and science.
-- Booklist (starred)

Survival of the Beautiful is not just a book about beauty, but a beautiful book. And also an important one that moves the debate about the biology of aesthetics beyond the cozy fables of evolutionary psychology to probe the deep nature of art and its origins. Both provocative and generous, Rothenberg's work is pervaded with a sense of wonder at and appreciation of the world.
-- Philip Ball, author of Critical Mass and Self-Made Tapestry

David Rothenberg is a brilliantly fun guide on a journey that takes us from bowerbirds to the neuroaesthetics of Semir Zeki. Survival of the Beautiful is just about the best travel literature of the mind out there. With wit by turns gentle and sharp, Rothenberg shows us how art is shaped by animals, and by us.
-- Roald Hoffmann, chemist and writer, winner of the
Nobel Prize in Chemistry

The nerdy mind-set of modernity often suffers allergic outbreaks when confronted with the softer side of cognition. Aesthetic pleasures are then cordoned off from the serious core work of science. But David Rothenberg makes a convincing case that beauty is an intrinsic aspect of reality. He argues, among other things, that without modern art, modern science would have been hobbled by inadequately challenged cognitive habits. Beauty evolved. Perhaps we should take it seriously.
-- Jaron Lanier, author of You Are Not a Gadget

David Rothenberg is a rarity--an actual polymath--and his writing, like the music he plays, reveals an extraordinary mixture of curiosity, intelligence, and playfulness. Tracing complex ideas that link consciousness, human spirit, and creativity within the framework of Darwinian theory leads to the sort of book you would expect from a man who makes music with whales and cicadas. Where does the impetus for the making of art and music reside? How does that fit into an evolutionary scheme? Read this book and enter into Rothenberg's world. You will be rewarded with an exploration of these questions that is both entertaining and revelatory.
-- David Ross, director emeritus, Whitney Museum of American Art
Posted by Whale of a Time at 18:33