Dolphins have no part in this dispute with Iran | Peter Singer 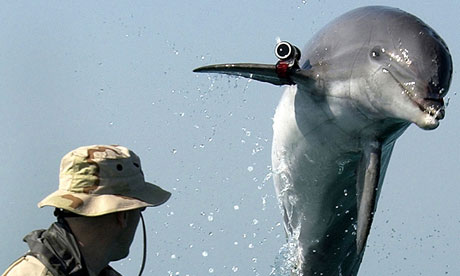 The US Navy has trained dolphins to detect mines. Now, they might be used in the conflict with Iran over its nuclear policies.

In response to heightened sanctions, Iran has threatened to block the Strait of Hormuz, the only sea route out of the Persian Gulf and, according to the US energy department, "the world's most important oil choke". Iran might use mines to do it, and if they should do so, then, according to retired US Admiral Tim Keating, who previously commanded the US 5th Fleet in Bahrain, "we've got dolphins."

Animals, or at least those who are conscious and capable of suffering or enjoying their lives, are not things for us to use in whatever way we find convenient. To believe that, because they are members of a different species, we can ignore or discount their interests is speciesism, a form of prejudice against beings who are not "us" that is akin to racism and sexism. We should give equal consideration to the interests of any sentient being, where their interests are similar to our own.

Dolphins are social mammals, capable of enjoying their lives. They form close bonds with other members of their group. They respond to images of themselves in a mirror, and use the mirror to examine marks on parts of their body that they cannot otherwise see – a test that is widely taken to be a sign of self-awareness, which human children cannot pass until they are somewhere between 18 months and two years of age.

The United States no longer conscripts its citizens to fight its wars. All its human troops are volunteers. But even conscripts have some basic rights. The dolphins have none.

Late last year, People for the Ethical Treatment of Animals, together with three international orca experts, and two former orca trainers asked a federal court in San Diego to declare that five orcas held and forced to perform by SeaWorld are held as slaves in violation of the 13th Amendment to the US Constitution that outlaws slavery. The suit has yet to be heard, but a similar case might be made against the US Navy for its use of dolphins.

Various civilizations have, at times, enslaved human beings and forced them to fight for their oppressors. That despicable practice is now rightly condemned, as far as human beings are concerned, but the enslavement of other species continues, in many areas of human life, and the use of slaves in war continues in the United States Navy.

It might be argued that as long as billions of animals are confined in factory farms to produce meat, eggs and milk, the use of a few dolphins in military action is trivial. Obviously, the amount of suffering we inflict on factory-farmed animals every day dwarfs whatever might happen to the dolphins.

Nevertheless, just when we are starting to realize how gravely we are wronging animals, and to do something about this – like the very welcome European Union ban on standard battery cages for laying hens, which came into effect on 1 January this year – we ought not to be finding new ways to exploit them.

Dolphins have nothing to do with the dispute over Iran's nuclear plans. Whatever the rights and wrongs of taking military action against Iran, let's leave the dolphins out of it.

guardian.co.uk © 2012 Guardian News and Media Limited or its affiliated companies. All rights reserved. | Use of this content is subject to our Terms & Conditions |
Posted by Whale of a Time at 21:46

Absolutely absurd, How fair it is to involve innocent animals in the war.

Thank you for your post. This is where the Rights of Cetaceans come in. Please support the petition for Cetaceans' Rights at http://www.whaleofatime.org/getinvolved.php
We are also organising an event later this year to raise awareness of the oceans and rainforests. Please subscribe to the Whale Mail at www.whaleofatime.org to get updates.