How Far Will Dolphins Go to Relate to Humans?

The Wild Dolphin Project: For 25 years, Denise Herzing has returned to the same place in the Bahamas to study a group of wild dolphins. Next year, she will pioneer a project to communicate with them. 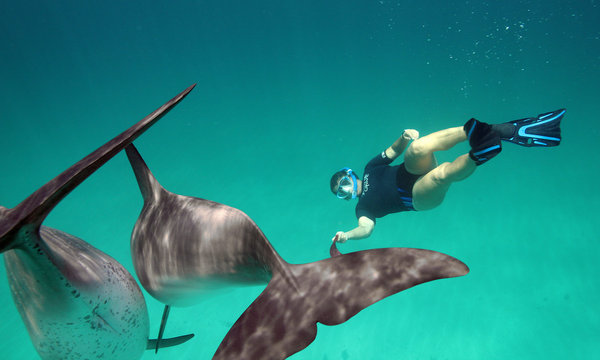 OFF THE BAHAMAS — In a remote patch of turquoise sea, Denise L. Herzing splashes into the water with a pod of 15 Atlantic spotted dolphins. For the next 45 minutes, she engages the curious creatures in a game of keep-away, using a piece of Sargassum seaweed like a dog’s chew toy.

Dr. Herzing is no tourist cavorting with marine mammals. As the world’s leading authority on the species, she has been studying the dolphins for 25 years as part of the Wild Dolphin Project, the longest-running underwater study of its kind.

“I’m kind of an old-school naturalist,” she said. “I really believe in immersing yourself in the environment of the animal.”

Immerse herself she has. Based in Jupiter, Fla., she has tracked three generations of dolphins in this area. She knows every animal by name, along with individual personalities and life histories. She has captured much of their lives on video, which she is using to build a growing database.

And next year Dr. Herzing plans to begin a new phase of her research, something she says has been a lifetime goal: real-time two-way communication, in which dolphins take the initiative to interact with humans.

Up to now, dolphins have shown themselves to be adept at responding to human prompts, with food as a reward for performing a task. “It’s rare that we ask dolphins to seek something from us,” Dr. Herzing said.

But if she is right, the dolphins will seek to communicate with humans, and the reward will be social interaction itself, with dolphins and humans perhaps developing a crude vocabulary for objects and actions.

Other scientists are excited by the project. “ ‘Mind-blowing’ doesn’t do justice to the possibilities out there,” said Adam Pack, a cetacean researcher at the University of Hawaii at Hilo and an occasional collaborator with Dr. Herzing. “You’ve got crystal-clear warm water, no land in sight and an interest by this community of dolphins of engaging with humans.”

How far will dolphins go to engage?