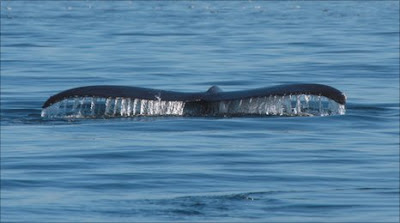 In a record-breaking journey, a female humpback whale has travelled across a quarter of the globe, a distance of at least 10,000km.
The event, reported in the Royal Society journal Biology Letters, is the longest documented movement by a mammal.
Its voyage was also twice the distance that the whales typically migrate each season to new breeding grounds.
Humpback whales typically travel up to 5,000km between breeding grounds
Scientists say the extreme behaviour shows how "flexible" these animals are.
Explore and adapt
The female whale was spotted and photographed twice - once at its regular breeding ground in Brazil, then later off the coast of Madagascar. 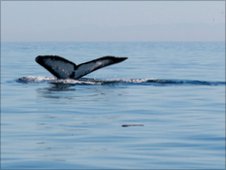 The shortest distance between these two locations is 9,800km.
The whales are identified by their tails or flukes (see image on the right)
The research team, led by Dr Peter Stevick from the College of the Atlantic in Maine, US, thinks the whale may have travelled this far in two distinct journeys. 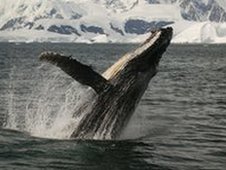 "If I had to guess, I'd say this animal did a normal migration to the Antarctic [to feed] and went to Madagascar from there," Dr Stevick told BBC News.
"If I were to draw a track for it, it would be from Brazil to the Southern Ocean and from there into the Indian Ocean."
The scientists were able to identify the animal from photographs that were taken of its tail, or fluke.
Each humpback whale has unique markings on the pale underside of its fluke.
The team is involved in a long-term study, collecting and examining the pictures of the whale flukes in an effort to develop a "big picture" of humpback behaviour and their migration patterns.
Such a long-distance movement between different breeding grounds is very rare.
And the fact that this was a female whale made the event even more unusual, as males are more commonly known to explore in order to find mates.
"Some exploration helps them to remain adaptable," explained Dr Stevick.
"If animals always returned to exactly the same place to breed, if anything happened to change that environment, they might not be able to adapt, so very occasional exploration could be beneficial for them."
The journey would have taken the animal at least several weeks and so far the scientists only have records of these two sightings.
"But we gather these research photographs from all over the globe," said Dr Stevick.
"So we're hopeful we will see this animal again, or see other animals doing related things."
Read more at http://news.bbc.co.uk/earth/hi/earth_news/newsid_9084000/9084490.stm
Posted by Whale of a Time at 01:12